Stagecoach Yorkshire bus drivers and depot staff must oppose the betrayal of their joint pay fight by Unite. Following talks with the company Monday at the Advisory, Conciliation and Arbitration Service, the union agreed to suspend the strike from today at Rotherham and Barnsley garages to vote on a revised offer. Talks continued yesterday with a separate offer now being tabled at the two Sheffield garages where the strike action is suspended from Thursday.

Unite regional officer Phil Bown said, “We will be making no further comment until the vote is finalised.” 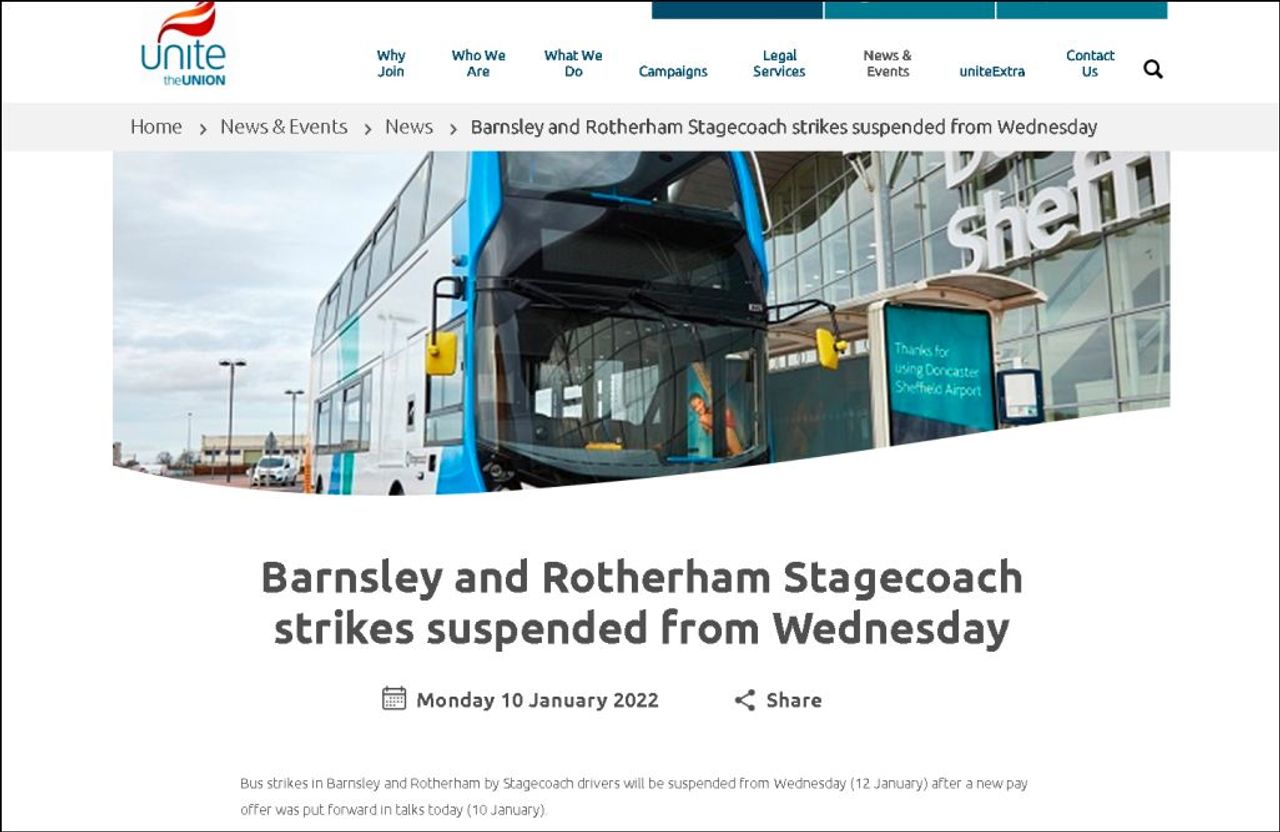 Without any of the details being disclosed Unite has already sabotaged the mandate of bus drivers and depot staff. Workers had made clear their basic demand was for a minimum increase in hourly pay to GBP11.40, ending the pay disparity between the garages. Rotherham and Barnsley bus drivers are paid GBP10.80 an hour compared to GBP10.52 in Sheffield.

Unite’s actions cut across the strivings of bus workers to overcome these inequities through a collective struggle as it entered the second week of indefinite strike action. The union and its General Secretary Sharon Graham are acting as the direct accomplices of Stagecoach and its divide and rule strategy. This is a recipe for a sellout and must be rejected.

The vote to escalate the strike action by around 560 members of Unite at garages in Rotherham, Barnsley and Sheffield was based on a 97 percent majority during the second round of weeklong rolling strike action in mid-December. This came after workers rejected a revised offer from the company. Bus drivers explained to the WSWS that it was barely more than half the increase in pay required just to keep up with inflation and increased National Insurance contributions from this April.

The strike in South Yorkshire was the first indefinite action at Stagecoach since a wave of pay disputes developed across its UK operations from last autumn.

Unite had relegated coverage of the strike at Stagecoach Yorkshire since the announcement of its escalation. The first press release Unite has produced more than three weeks after the indefinite action was announced relates to its suspension. The handful of posts on Unite’s Twitter page were not directed towards appeals to other workers and to mobilise them behind the strike, but to management and enforcing its isolation of the dispute.

The tweets included a short poem addressed to the Managing Director of Stagecoach Yorkshire Phil Medlicott which ends, “All our members want is decent pay, So come on Phil, what’s the delay?” The calls for solidarity went no further than encouraging motorists driving by the picket lines to honk their horns in support! Unite has prevented 20 pay disputes across the UK network of Stagecoach from becoming the basis for a national stoppage at the largest private bus operator which runs 25 percent of bus routes across the country. Strike mandated action was overturned one after the other in favour of “improved offers” while in the two cases where Unite could not prevent a strike these were isolated and ended on similar sellout agreements.

Graham has maintained that even the threat of strike action has been sufficient for workers to defeat pay restraint. This has been based on a campaign of d isinformation over the contents of the deals agreed and to justify the role of Unite as an industrial police force on behalf of Stagecoach. The sabotage of a national strike has led to pay agreements which in the vast majority of cases trail behind inflation, currently standing at 7.1 percent.

Days before indefinite strike action began in South Yorkshire, Unite prevented a second front opening up against Stagecoach by suspending 10 days of strike action from January 4 by 400 workers at its Cambus subsidiary in Cambridgeshire in the east of England. Bus drivers, engineers, cleaners and shunters voted to strike by 96 percent, rejecting an insulting offer of 1.5 percent from April 2021 and a further 1.5 percent from December for 2021/2 after suffering a pay freeze since last year. After Graham declared that Unite was “standing 100% alongside Cambus bus workers”, the union began separate talks first at the Cambridge and Fenstanton garages on December 29 and then the following day at Peterborough.

Unite has drawn a veil of secrecy around the deal struck, with regional officer Mark Plumb informing the local media, “Details of the offer remain confidential while our members vote on the package. In the meantime, they are working normally.”

The demobilisation on the pay fight at Stagecoach was also aimed at preventing it from becoming a focal point for bus workers across other private operators. At the end of last year Unite nipped in the bud a strike movement at Arriva Bus UK.

It first suspended strike action at Arriva North West and later ended a five week strike on the fifth day at Arriva Wales–in both cases agreeing below inflation pay deals of a miserly 3 percent. Unite has tried to avert strike action at First Group another member of the “Big Five” private bus operators which runs 20 percent of bus routes across the country. Around 300 drivers at the Oldham garage employed by First Manchester struck Monday and Tuesday this week and have voted by 99 percent for further action on January 18, 20, 24 and 26.

Unite attempted to call off the strike in talks with management last Friday over an undisclosed pay offer, but the company would not even agree to backdate the claim to the anniversary date it should start from. In October last year Unite suspended eight days of strikes voted for by over 1,000 bus drivers at Stagecoach in Greater Manchester to push through a below inflation pay deal of 3.7 percent. Graham stated in a press release on December 29, “Unite will have no truck with the Bank of England’s call for wage restraint, especially when CEOs continue to bag eye-watering salary and benefit packages.

Workers must not be the ones who pay the price of this pandemic.” In practice the opposite is true. Stagecoach recorded a profit increase of 104.3 percent in the six months leading up October 2021 of GBP32.9 million and celebrated the full reopening of the economy as it is weaned off huge government subsidies.

It is looking forward to a windfall for shareholders through its planned takeover by National Express. In contrast Unite has guaranteed bus worker’s pay will not even keep pace with the rising cost of living. This is what the WSWS means by its definition of Unite and the other unions as corporatist–not defensive organisations of workers, but an extended arm of the corporations and government to snuff out workers’ resistance.

Bus workers cannot develop a fight for decent pay without a rebellion against Unite and the other trade unions who reinforce the interests of the corporate elite over society. This takes its sharpest form in the criminal response to COVID-19, with the Labour Party and the unions at one with the Johnson government and its mantra of “living with the virus” as Omicron drives up more mass infections and death to shore up profits and share values. The consequences of this have been exposed by bus workers who have pointed out the role of Unite in the cover-up, which must be met with the collective response of the working class in mass political action through the formation of a network of rank and file committees.

This is the perspective advanced by the London Bus Rank and File Committee, in its call, “Organise a fightback for higher wages!

Related TopicsFind out more about these topics: